The sixties: the beginning

At the start of the 1960's, prompted by his intuition, Jean Dinh Van left Cartier and turned his attention to contemporary design, advertising and the birth of ready-to-wear.

He set up his own business, at Place Gaillon, near Place Vendome in 1960. After designing the two-pearl ring for Pierre Cardin in 1967, he was chosen as one of the four top French jewelers and exhibited in Montreal.

Thanks to this first step on the American continent, he started collaborating with Cartier in New York. The designs created were signed "Cartier dinh van". After a couple of years, distribution had spread to the whole of North America.

At the end of the sixties, Jean Dinh Van decided jewelry might leave the traditional Place Vendome. His creations were distributed at the Publicis Drugstore, the mythical place that sold "luxury to everyone".

dinh van's creations are always inspired by an accurate observation of the world and by everyday objects. Since the beginning, dinh van designs have included pieces with a sophisticated sense of humor.

The "handcuffs" clasp was born out of a key-ring in 1976. Always looking for simple, easy-to-wear jewelry, dinh van was flirting with gadgets and created the "handcuff key-ring", based on the principle of neatly separating a set of keys. He then managed to transform this happy idea into a great success, because he turned this clasp into a whole new piece of jewelry which is still a best seller.

The same year, he set up a store a stone's throw from the greats of the Rue de la Paix (Paris), opening a boutique at # 7. The boutique seemed more like a gallery, intended to host interesting events.

The eighties: the ascent

A definite pioneer, he was one of the first to welcome Swatch's watches in which nobody had faith and that contrasted wonderfully with his own creations...The newspaper's headline decried "a tragedy at Rue de la Paix".

Some jewelers had confidence in him right from the start and distributed his products in Paris, in provincial France, in Switzerland and in Belgium.

During the 1980's, Jean Dinh Van's style was to blossom and his designs were distributed ever more widely, both at home and abroad.

The nineties: the icon's creation

In the nineties, a law authorized the import of 9k gold in France (an alloy with a very small proportion of gold). In order to protest against the use of such a poor alloy of gold, dinh van created the Chinese Pi (Pi Chinois), a piece of jewelry made out of 24k pure gold. Inspired by Asian jade discs, the Chinese Pi is hammered by hand, which hardens and makes each piece unique like the individual that wears it.

At the beginning of the 20th century, dinh van once again revolutionized the world of jewelry. dinh van invented a new way of wearing jewelry: a precious metal on a cotton cord bracelet. This invention definitely brought a wave of freshness to the jewelry world. A true phenomenon, the cord bracelet inspires everyone around Place Vendome as it brings fashion into the world of jewelry, allowing people to stack bracelets and change cord colors according to their whims.

In 2003, dinh van's creative talents were acknowledged by Aesthete and its peers as his iconic jewels became part of the Decorative Arts Museum's permanent collection in Paris.

During the 2000's and 2010's, dinh van took up the tradition of inviting two free-spirited creators to reinterpret an iconic collection: Pi Chinois. In 2004, Milan Vukmirovic (cofounder of COLETTE) associated oynx and agate to the mythical circle. To celebrate the new decade, Lapo Elkann innovate choosing carbon fiber that is sublimated into a precious metal under the jewelers hand. 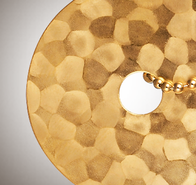